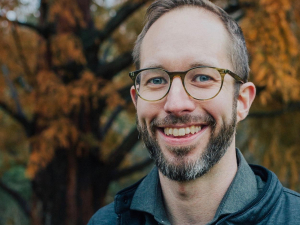 Christopher Bail: There Is More to the Story of Facebook's Trump Decision
May 5, 2021

read more about Christopher Bail: There Is More to the Story of Facebook's Trump Decision » 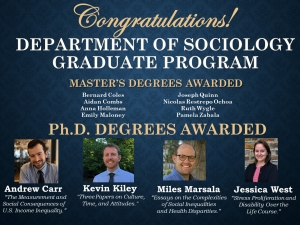 The Department of Sociology recognizes and congratulates those students receiving their graduate degree in Sociology during the 2020-21 academic year. read more about Congratulations New Ph.D's!  » 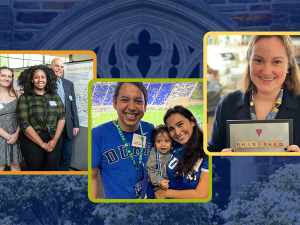 read more about Making the Most of Duke on the Road to the Ph.D. » 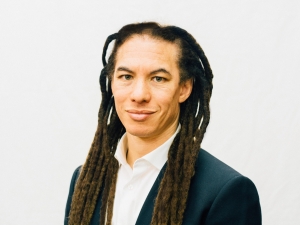 Meet Tyson Brown and other Duke researchers who are supporting others’ wellbeing during this difficult time
April 28, 2021

EIGHT DUKE SCHOLARS EXAMINING THE MENTAL HEALTH EFFECTS OF THE PANDEMIC When the world shifted abruptly in March 2020, so too did the research programs of many Duke scholars.  Faculty members in myriad fields began gathering real-time data about the pandemic, including several scholars who analyzed various aspects of its psychological impact and are working to bring help to those most affected.  Click here to read full article. read more about Meet Tyson Brown and other Duke researchers who are supporting others’ wellbeing during this difficult time » 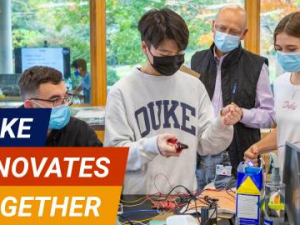 read more about Celebrating Duke Innovation: How Scholars Are Collaborating To Find Solutions to Pressing Challenges » 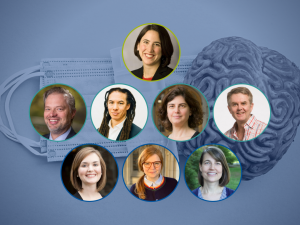 When the world shifted abruptly in March 2020, so too did the research programs of many Duke scholars.  Faculty members in myriad fields began gathering real-time data about the pandemic, including several scholars who analyzed various aspects of its psychological impact and are working to bring help to those most affected.  Here are a few examples: The COVID-19 Family Study and Coping Together Program Eve Puffer, assistant professor of psychology and neuroscience and global health, has spent much of her career building… read more about Eight Duke Scholars Examining the Mental Health Effects of the Pandemic » 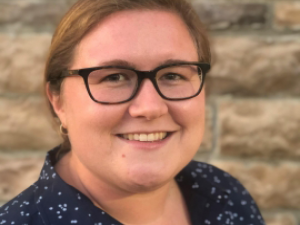 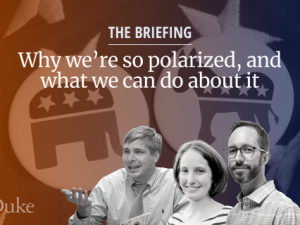 While social media platforms can employ algorithms and other tools to help improve the level of public debate, the best way to decrease outrage and polarization is for everyone involved to be responsible for their own online behavior, three Duke experts said Wednesday. Speaking to journalists during a digital media briefing, the three scholars discussed civility, the powers and limits of big platforms like Facebook and Twitter, and the many misperceptions people have about those on the ‘other side’ of the political divide… read more about Don’t Like Online Outrage? Look Inward » 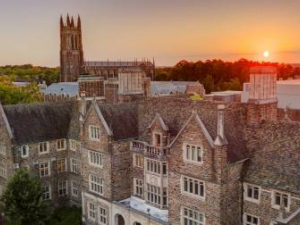 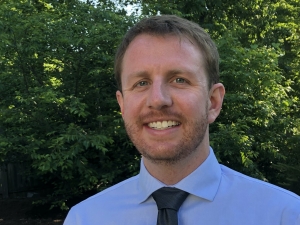 On Thursday, March 25, Kevin Kiley successfully defended his dissertation, "Three Papers on Culture, Time, and Attitudes." His committee consisted of Stephen Vaisey (chair), Craig Rawlings, Kieran Healy, and Christopher Johnston (Department of Political Science). Kiley has accepted a postdoctoral position at the University of Iowa's Department of Sociology and Criminology. He will be working with Yongren Shi on a project that uses computational methods to understand behavioral deviance and group radicalization in online… read more about Kiley Defends Dissertation, Accepts Postdoctoral Fellow » 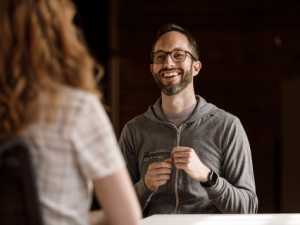 When he was 11, Chris Bail and his family moved from the Boston suburbs to the French Congo, a turbulent African nation whose fragile peace was routinely upended by three warring military factions. The 18 months or so living there -- while his father worked as a doctor and public health activist for the World Health Organization -- shaped Bail forever. He saw his mother nearly die when a knife was thrown near her at a market, and his father imprisoned when he refused to pay a bribe. Chris and his mother soon fled the… read more about Fighting Online Extremism » 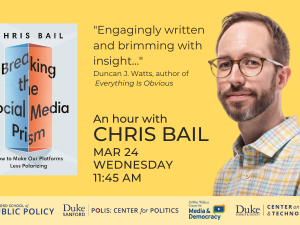 In an era of increasing social isolation, platforms like Facebook and Twitter are among the most important tools we have to understand each other. We use social media as a mirror to decipher our place in society but it functions more like a prism that distorts our identities, empowers status-seeking extremists, and renders moderates all but invisible. Chris Bail, in conversation with Matt Perault, will discuss his book: Breaking the Social Media Prism which challenges common myths about echo chambers, foreign misinformation… read more about An Hour with Chris Bail » 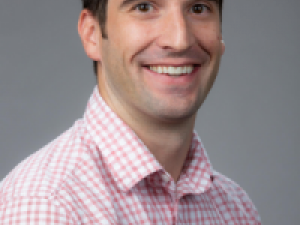 Through a Collaborative Project Expedition in Summer 2020, I had the opportunity to work with Jen’nan Read to redesign her Sociology 255: Immigration and Health course. Our goal was to create hands-on, project-based learning experiences with a local community partner that would enhance in-class lectures and academic readings on immigrant and refugee health.  Jen’nan and I partnered with Rob Callus, Director of Youth Services at World Relief Durham (WRD), a federally funded agency that assists refugees by providing academic… read more about Community Partnerships and Real-world Data Bring Refugee Health to Life in Undergraduate Course » 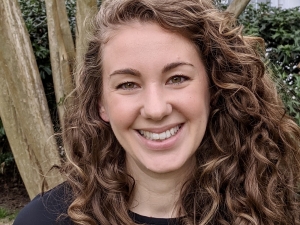 Allison Stolte is the recipient of the Graduate School's 2021-2022 Phillip Jackson Baugh Fellowship for her dissertation research that examines how social stratification and state-level policies shape the intergenerational transmission of health through birth outcomes. This one-year competitive fellowship is for the promotion of careers and interest in the areas of aging and human development. The Baugh Fellowship provides an annual stipend, as well as tuition and fees. read more about Stolte Wins Baugh Fellowship » 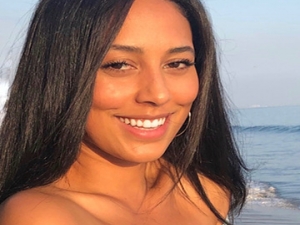 Duke Sociology Major, Syann Cadogan, to represent Duke at the 2021 ACC Meeting of the Minds
March 12, 2021 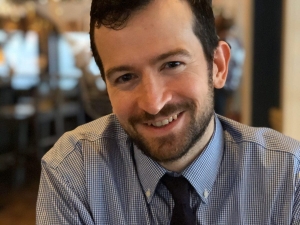 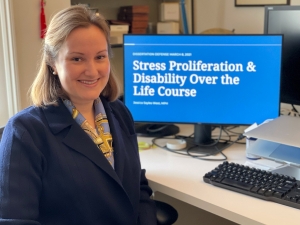 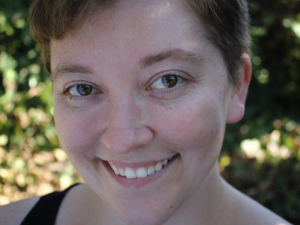 About Liann I’m from the San Fernando Valley of Los Angeles, CA and attended UC Davis as an undergraduate. I knew as an undergrad I wanted to get my PhD, so my senior year I applied to doctoral programs, accepted my offer of admission, graduated in June, and was in Durham by August. My mentor was a little concerned I was taking on graduate school a bit fast, but I knew this was the right decision for me. My mentor in undergrad introduced me to the topic of networks and I immediately knew that was my focus. Choosing Duke… read more about Liann Tucker Uses Network Analysis to Study Adolescent Mental Health and Health-Risk Behaviors  » 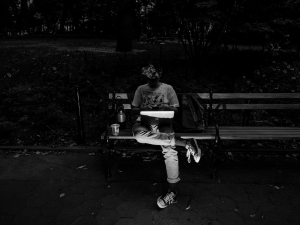 Democracy Is Weakening Right in Front of Us
February 26, 2021

Research by Christopher Bail, professor of Sociology and director of the Polarization Lab, was cited in a New York Times article about "technopessimism." read more about Democracy Is Weakening Right in Front of Us » 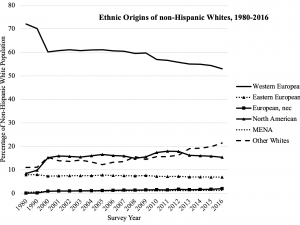 Professors Jen’nan Read, Scott Lynch, and PhD candidate Jessie West recently published the lead article in a special issue of Population Research and Policy Review. In the article, they challenge the conventional approach to treating non-Hispanic Whites as the comparison group to gauge racial and ethnic health disparities. Instead, they use nationally representative data to examine the extent of diversity in health among Whites and find that health disparities within the White population are almost as large as… read more about Duke Sociologists challenge prior research, find ethnic diversity in health among Whites » 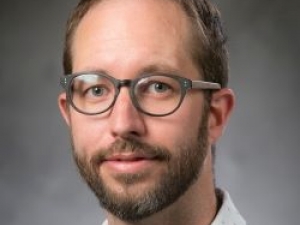 Christopher Bail, Duke Professor of Sociology, is quoted in New York Times article, Democracy Is Weakening Right in Front of Us. Is technopessimism our new future?  A decade ago, the consensus was that the digital revolution would give effective voice to millions of previously unheard citizens. Now, in the aftermath of the Trump presidency, the consensus has shifted to anxiety that online behemoths like Twitter, Google, YouTube, Instagram and Facebook have created a crisis of knowledge — confounding what is true… read more about Christopher Bail Quoted in New York Times Article » 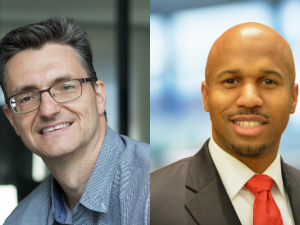 Join Martin Ruef and Ihsan Beezer for Princeton's series on Black Entrepreneurship History and Legacy in the United States.
February 9, 2021

Exoduster Entrepreneurs: Creating Black Business Communities in the West Join the Keller Center at Princeton University in welcoming Dr. Martin Ruef from Duke University and Ihsan Beezer from Rutgers University for a talk on black businesses in the west. Their lecture is part of the Keller Center's initiative to understand the history and legacy of black entrepreneurship in the United States.  Click here for the full article. read more about Join Martin Ruef and Ihsan Beezer for Princeton's series on Black Entrepreneurship History and Legacy in the United States.  » 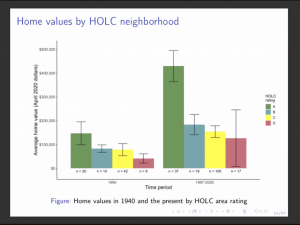 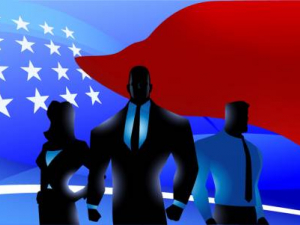 Eduardo Bonilla-Silva, James B. Duke Distinguished Professor of Sociology, co-authored an article for The Bulwark, arguing that "Allowing freedom to become synonymous with the cultural right will make it harder to address a range of public challenges, and will degrade the concept of freedom itself." read more about Eduardo Bonilla-Silva: Reclaiming Freedom from the Right Wing » 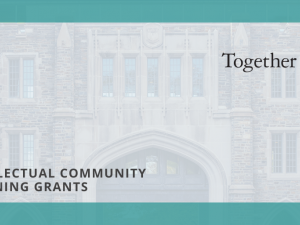 From Marine Medicine to the Economics of Education, Faculty Build New Collaborations
January 8, 2021 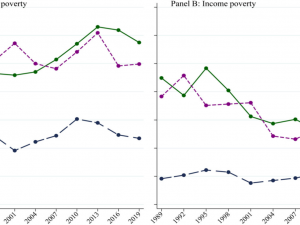 Professor of Sociology, Lisa Keister, discussed her recent paper, “Net Worth Poverty in Child Households by Race and Ethnicity, 1989-2019” on the podcast, This Week in Sociological Perspective.  The paper was published in the Journal of Marriage and Family, and is co-authored by Christina Gibson-Davis and Lisa A. Gennetian.  Click here for the audio version of the podcast. Click here to read the online article.  read more about Paper coauthored by Christina Gibson-Davis, Lisa Keister, and Lisa Genettian appears in Journal of Marriage and Family. Keister interviewed on podcast » 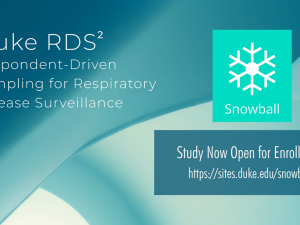 A group of investigators at Duke University is embarking on an innovative research study that will draw upon expertise and insight from across campus to detect active, undiagnosed cases of coronavirus infection and shed light on how the SARS-CoV-2 coronavirus spreads through communities in Durham, North Carolina. The study, called “Snowball” for short (the full name is “Duke RDS2: Respondent-Driven Sampling for Respiratory Disease Surveillance, the Snowball Sampling Study”), officially opened to enrollment on Friday,… read more about Learning to See the Whole Picture during the COVID Pandemic: Duke University’s Snowball Study » 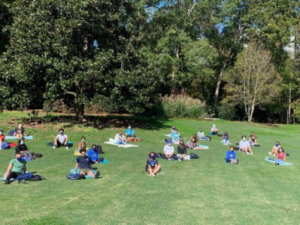 read more about In This Class, COVID Restrictions Led to New Learning Opportunities » 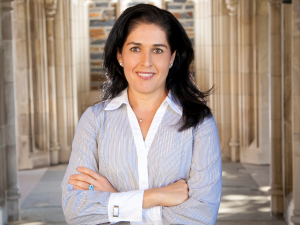 Jen’nan Read on Teaching During a Pandemic
December 9, 2020

This is the first in an occasional series of essays by Duke faculty members whose normal fall 2020 class routines were disrupted by the pandemic. These essays will examine how faculty adapted. DURHAM, N.C. — This fall, I knew my Immigration and Health (SOC 250) class would be different. How could it not? I would teach it in person, twice a week to 27 students, socially distanced, wearing masks, in a large campus auditorium.  Click here to read full article. read more about Jen’nan Read on Teaching During a Pandemic » 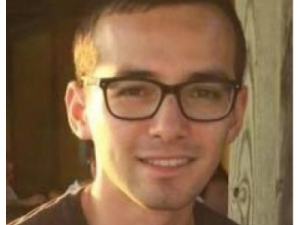