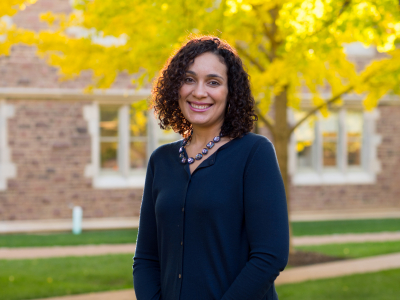 When asked about her work, Hedwig (Hedy) Lee points to a quote from Ralph Ellison’s novel “Invisible Man”:

“I am invisible, understand, simply because people refuse to see me.”

Lee, who joined Duke this fall as a professor of Sociology, is dedicated to measuring the invisible. She quantifies some of the most critical issues facing society today, such as racial and ethnic health disparities, in an effort to shed light upon forms of inequality that would otherwise go unseen.

“We can't really see or understand a problem until we can measure it,” said Lee. “A lot of my work, especially when it comes to thinking about health inequality, is about better measurement.”

Lee defines herself as a social demographer. Her work focuses on the social determinants of health, and in understanding racial and ethnic disparities that are the result of systemic racism.

Through her research, Lee seeks the overlooked. When examining the health consequences of systemic racism in the criminal justice system, for example, her research reaches beyond individuals directly impacted.

“We often focus on those who are, or have been, incarcerated,” said Lee, “and we don't really think about the ways in which their experiences also impact family members, who are often women taking care of things behind the scenes whose health and well-being are also deeply impacted but often ignored.”

In other cases, important factors affecting health outcomes are overlooked. In her more recent research, Lee looks directly at a fatal expression of systemic racism in the criminal justice system: individuals who died following a police encounter. In collaboration with colleagues at the University of Washington in St Louis, Rutgers University and Harvard University, she is measuring the relationship between skin tone among Black populations and risk of police-involved death.

Lee’s research makes use of large, publicly available databases, and this project is no exception. Her team obtains their data from the Fatal Encounters database, which attempts to document all instances of fatal encounters between civilians and police officers in the United States through media coverage and public record.

But even the best databases have problems. Not all data is created equal, it isn’t always collected in the same way, and in some cases key information is missing. The Fatal Encounters database itself was created in response to the shortcomings of official data, which contained severe undercounts of fatal police-civilian interactions. However, it doesn’t report on victim skin tone, a crucial parameter for Lee’s research. She and her team are currently devising the best possible methods to add skin tone information to the database in the most unbiased way possible.

“I spend a lot of time thinking through these issues,” Lee said, “especially when we're trying to estimate things that are as sensitive and as important as how many people have been killed by police.”

For Lee, the results justify the effort. “When we published our analysis of the Fatal Encounters data saying that, ‘One in 1,000 Black men and boys will die in the hands of the police,’ this is key information that helps us understand significant racial and ethnic differences in fatal police-civilian interactions,” she said. “The victims that we see on the news are part of a larger picture of racial/ethnic inequality that was formerly opaque to us.”

This project is also an example of how interdisciplinary and collaborative Lee’s research is. “There's been a big push to think about the role of systemic racism in health, and that work can't be done just by social scientists,” Lee said. “Humanists have to be part of these conversations. Medical care providers, public health researchers and community members, we all have to be a part of that.”

“It's exciting to be in a place that also understands this and provides opportunities for faculty to engage in these collaborations, formally and informally,” she said.

Lee also hopes to extend the interdisciplinary nature of her research into her teaching. “The longer I study sociology and health experience the more I realize the need to integrate the humanities into sociology,” she said. “I’d like to teach a visual sociology course, for example, thinking through how media, arts and literature reflect the social world, and how social science and sociology inform media, arts and literature.”

“College is such an important time,” she said, “It's a very special period of your life, where you can just immerse yourself and learn about things you maybe never thought you would learn about. I learned so many things as an undergraduate, and I was lucky to have great mentors, so it's really, really important for me to do that for my students.”

Lee is on leave this fall and working remotely until the spring, but she is eager to come to back to North Carolina, where she completed her Ph.D. at the University of North Carolina at Chapel Hill.

“We live in a global world, we can Zoom like we're doing right now, which is great, but it's also great to have that sort of spontaneous moment where you can think through things face to face,” she said. “I'm excited to be closer to my collaborators in the department, and to work with Duke’s really stellar students.”

She isn’t the only one eager to come. Her seven-year-old daughter is particularly excited about one of Duke’s centers.

“Her favorite animals are lemurs,” Lee said. “She has lemur shirts, lemur stuffies, she makes lemur pottery, she knows all the facts about them, so that's definitely something that's on the top of our list when we arrive: visit the Lemur Center.”