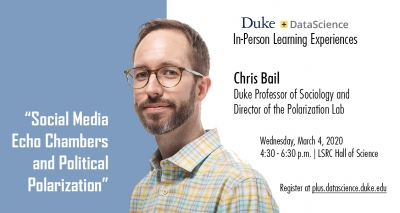 There is widespread concern that social media platforms have created filter bubbles that reinforce peoples’ pre-existing views and prevent them from being exposed to those who do not share them. Though many people believe popping filter bubbles will reduce political polarization on social media, this talk will present multiple field experiments that challenge this common wisdom. I will first describe two studies that employed bots, network analysis, and quantitative surveys in order to show that popping peoples’ filter bubbles makes them more polarized; not less. Drawing upon in-depth interview and text-based data, I will argue that this backfire effect occurs because of an identity-threat mechanism linked to both core theories in social science as well as recent advances in neuroscience. Finally, I will describe ongoing research currently being conducted within my Polarization Lab that experimentally manipulates the identity of people deliberating on a de novo social media platform in order to further test this hypothesis. The results may be of interest to those who study political communication, social media, or the emerging field of computational social science.